The price of your bike - does it really matter? 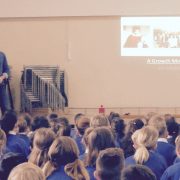 “I am an Ironman” – Self Confidence
Scroll to top